Paul McCartney has written a personal letter to His Holiness The Dalai Lama, the spiritual and political leader of Tibetan Buddhism, urging him not to eat meat. Buddhists believe in reincarnation and in compassion for all living beings. One of the five precepts of Buddhism is “do not kill,” which is explained “One must not deliberately kill any living creatures, either by committing the act oneself, instructing others to kill, or approving of or participating in act of killing.” Buddhism does allow for personal choice and exceptions when it comes to the precepts, and they are not set in stone, but many Buddhists interpret that precept as a call to vegetarianism.

The Dalai Lama, however, continues to eat meat at the insistence of his doctors. Paul McCartney told him that they’re wrong and he doesn’t need meat, which inevitably causes suffering:

The Beatles legend wrote to the spiritual leader to point out that meat-eaters contribute to the suffering of animals, contradicting his statement that Buddhists “believe in not causing suffering to any sentient beings”.

And the Hey Jude hitmaker even disagreed when the Dalai Lama insisted he ate meat for health reasons.

In an interview with Prospect magazine, MCCartney says, “I found out he was not a vegetarian, so I wrote to him saying ‘Forgive me for pointing this out, but if you eat animals then there is some suffering somewhere along the line’.

“He replied saying that his doctors had told him he needed it, so I wrote back saying they were wrong.”

[From Contact Music, thanks to vdantev for the tip]

I’m a meat-eater, but my dad and brother are vegetarians and I understand the choice. It’s something that people chose to do for personal reasons, and many site the intense environmental cost of meat production. You can get the same protein and nutritional benefits from a non-meat diet, but it’s not as easy and requires planning. It’s surprising to me that the Dalai Lama would eat meat given his personal philosophy, but he also seems like the type who follows his own path and isn’t one to let rock stars tell him how to live his life. Rock stars that have their own vegetarian food line I might add, not that it makes McCartney’s commitment to animal rights any less genuine.

Any Buddhist who is eating meat IS NOT a real Buddhist

In India, Shakyamuni Buddha emphasized the importance of Ahimsa (Non-Violence), the principle not to hurt any living beings, specially not to kill animals. He warned His disciples not to eat meat ; other living beings would thus get scared of them. Lord Buddha made the following observations: "The eating of meat is just an acquired habit. We were initially not born with a desire for it."

"People who eat meat, destroy the seed of great compassion in their hearts". "People who eat meat , kill each other and eat up each other... In this life I eat you, in the next life you eat me ... and so it goes on according to the law of karma. How can they ever conquer the Three Kingdoms of Maya or illusion?"

Prabhupada: Just like I'm killing some animal, eating, enjoying, so it is karma-bandhana. I am being locked up with my action so that I shall become again a cow or goat, this cow and goat will become man, and he will kill me and eat. That is the Law of Karma. 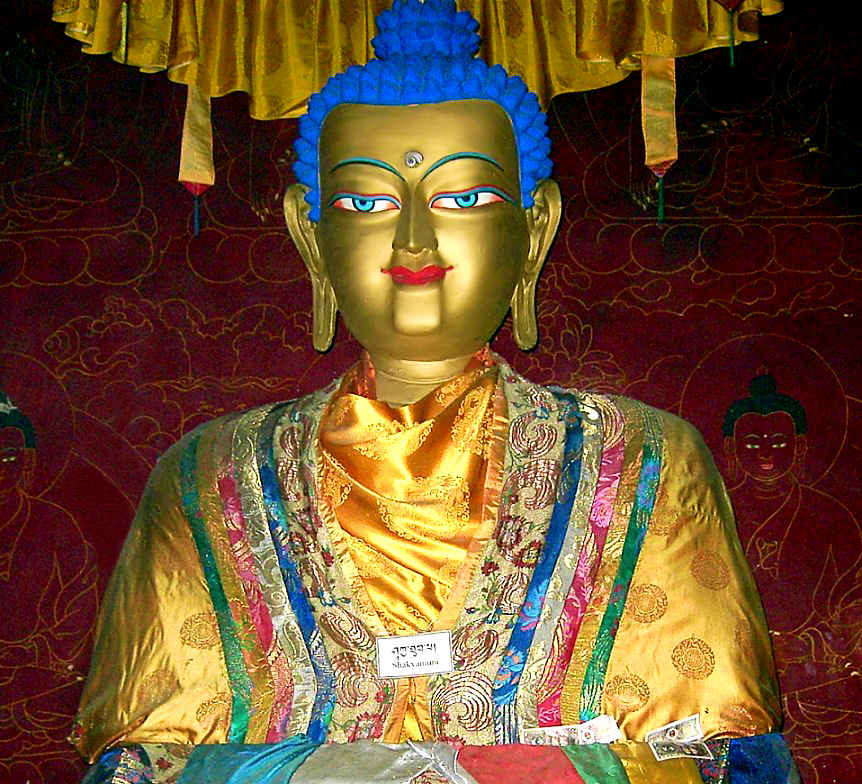 "For the sake of love of purity, let the Bodhisattva refrain from eating flesh, which is born of semen, blood etc. To avoid causing terror to living beings, let the disciple, who is disciplining himself to attain compassion, refrain from eating meat... It is not true that meat is proper food and permissible when the animal was not killed by himself, when he did not order to kill it, when it was not especially meant for him.

There may be some people in the future who, being under the influence of taste for meat will string together in various ways sophistic arguments to defend meat eating.

But meat-eating in any form, in any manner and in any place is unconditionally and once and for all prohibited.

"Meat eating I have not permitted to anyone, I do not permit and will not permit..." (Lord Buddha, Lanka vatara Sutra) 1

After my paranirvana in the last kalpa different ghosts will be encountered everywhere deceiving people and teaching them that they can eat meat and still attain enlightenment.. .How can a bhikshu, who hopes to become a deliverer of others, himself be living on the flesh of other sentient beings?" (Lord Buddha, Surangama Sutra) 2

"All tremble at violence; all fear death. Putting oneself in the place of another, one should not kill nor cause another to kill." (Lord Buddha, Dhammapada, 129)

"One who, while seeking happiness, oppresses with violence other living beings who also desire happinesss, will not find happiness hereafter." (Lord Buddha, Dhammapada, 131)

"He who has renounced all violence towards all living beings, weak or strong, who neither kills nor causes others to kill - him I do call a holy man." (Lord Buddha, Dhammapada, 405) 3

"Anyone familiar with the numerous accounts of the Buddha's extraordinary compassion and reverence for living beings - for example his insistence that his monks strain the water they drink lest they inadvertently cause the death of any micro-organisms 4 - could never believe that he would be indifferent to the sufferings of domestic animals caused by their slaughter of food" (Roshi Philip Kapleau, in To Cherish All Life) 5

"The inhabitants are numerous and happy... Throuhout the country the people do not kill any living creature, nor drink intoxicating liquor.. .they do not keep pigs and foul, and do not sell live cattle; in the markets there are no butcher shops and no dealers in intoxicating drink... Only the Chandalas (lowest cast) are fisherman and hunters and sell flesh meat." 6  (famous 4th century Chines Buddhist traveller Fa-hsien)

"I have enforced the laws against killing certain animals and many others. But the greatest progress of Righteousness among men comes from the exhortation in favour of non-injury to life and abstention from killing living things. " 7 (Pillar Edict of King Ashoka, 268-233 BC)

The 13th Century Zen Master Doyen, while visiting China, asked this question: "What must the mental attitude and daily activities of a student be when he is engaged in Buddhist Meditation and practice? Ju-Ching answered that one of the things he should avoid is eating meat. 8

"The salvation of birds and beasts, oneself included -this is the object of Shakyamuni's religious austerities." (Zen Master Ikkyu)

"In China and Japan the eating of meat was looked upon as an evil and was ostracised.. .The eating of meat gradually ceased (around 517) and the tended to become general. It became a matter of course not to use any kind of meat in the meals of temples and monasteries." 9 (Encyclopaedia of Buddhism)

"There is just no reason why animals should be slaughtered to serve as human diet when there are so many substitutes. Man can live without meat." - The Dalai Lama

He saw the whole human race going to hell by this animal killing. So he appeared to teach ahimsa, non-violence, being compassionate on the animals and human beings.

Actually animal-killing, no religion sanctions. In Christian religion also, it is clearly stated, 'Thou shall not kill'. Everywhere animal killing is restricted. In no religion unnecessary killing of animals is actually allowed or supported. But for this nobody cares nowadays.

The killing of animals is increasing, and so are the reactions. Every ten years you will find a war. These are the reactions." - His Divine Grace A.C. Bhaktivedanta Swami Prabhupada, Founder-Acarya of ISKCON, the Hare Krishna Movement.

Why We Dont Eat Meat
by A.C. Bhaktivedanta Swami Prabhupada

YES WE AGREE WITH PAUL MC CARTNEY
The Dalai Lama is wrong to eat meat !!!

According to Lord Buddhas teaching of AHIMSA
no real Buddhis will ever eat meat.